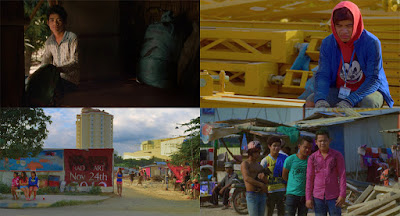 The fiction debut for the French-Cambodian helmer Davy Chou boasts some impressive visuals and provides an insightful look at transitional Cambodia and its disenchanted and disoriented youth. Only by virtue of Tomas Favel's striking cinematography complemented by the befittingly melancholic score, its meandering narrative does not seem like such a huge drawback.

A coming-of-age tale which portrays the insurmountable gap between the rich and the poor is told from the viewpoint of its hero - an 18-yo country bumpkin, Bora (Sobon Nuon), who leaves his village to become a manual worker on a construction site near Phnom Penh.

The partially finished residential complex of Diamond Island where he finds a job is advertised as future Heaven on Earth, its 3D rendering revealing a kitschy architectural monstrosity for the 'fat cats' to waste their money on. As irony would have it, the ones building the luxurious apartments earn $150 a month and could hardly afford a pantry there.

Bora spends his dusty days carrying scraps around and 'neonized' nights frequenting fairs and dance clubs together with his peers who make advances at local girls, peacocking in T-shirts of oversaturated colors which are also to be found in many details of the setting. One evening, he encounters his older and estranged brother, Solei (Cheanick Nov), hanging out with cool kids and doing pretty well, so soon afterwards, he is 'spoiled' by extra bucks and expensive presents...

As Bora's poetic, minimalist story heads in familiar directions, Chou puts us in contemplative mood of sorts and treats our eyes with one vivid frame after another. Blending social and arthouse drama of dreamy qualities with an 'urban' anthropological essay, he purposely indulges in a style-over-substance approach, but that doesn't prevent him from providing a few emotionally resonant moments. His film has a sincere and modest heart which is in the right place, even when the focus and naïve performances by the non-pro cast ensemble are not.


At the moment, Diamond Island is playing on Festival Scope. 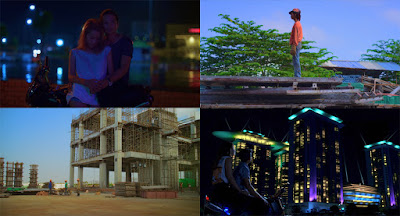