Sometimes, they DO make them like they used to. 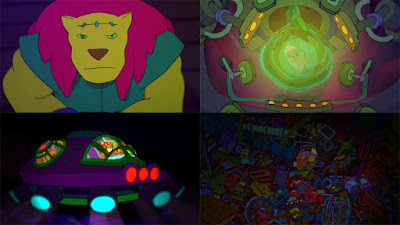 If Nova Seed had been released in the 80s, many of the thirtysomething year olds of today would have cherished it as one of the most precious memories of their childhood. A labor of true love and commitment, this 'little' rough gem of retro animation is mostly done by only one man.

The Japan-based Canadian animator Nick DiLiberto dedicated four years of his life to hand-draw every frame of his 64-minute feature debut, in spite of the blisters (and band-aids used to cover them). With that in mind, a viewer has to be amazed by his achievement worthy of all the superlatives that the reviewers has bestowed on it so far.

Storywise, the author employs sci-fi, fantasy and adventure tropes and archetypes, offering a compelling, if not original mélange of ideas. A mad scientist, Doctor Mindskull, wants to use a mysterious force, Nova Seed, embodied in a fragile-looking girl to conquer the unnamed alien planet which might be post-apocalyptic Earth as well. Standing in his way is a NAC (Neo-Animal Combatant) - a reluctant lion-man hero who's all action and no words. With a kind heart beating in his large, yellow chest, he breaks free from the confines of the gladiatorial prison, beats up a troop of human soldiers, saves Nova more than once (and falls for her), jumps from one aircraft to another in the heat of a dogfight, gets shot, bruised and battered (occasionally by a tenacious bounty hunter), and still manages to save the day!

Even though the 'day' lasts too short, DiLiberto's nostalgia-driven opus brims with inventiveness: bizarre characters, odd paraphernalia, colors that speak several languages (louder than words), larger than mutated life sequences of hybrid vs. human battles and, ultimately, a monster 'of Ghibli-esque grandeur' (in the words of Andrew Mack). The themes of ecology, societal decadence, as well as the corruptive and destructive nature of power are intertwined in a work which is best described as a Saturday Morning Cartoon meets Heavy Metal meets Rock & Rule meets Mad Max meets Masaaki Yuasa's anime by the way of René Laloux. But, the 'substance' does not matter as much as the trippy aesthetics.

There's a special charm in the 'beat-boxed' sound effects (a boy would produce whilst playing with his toys) and ragged, pulsating lines of a bit crude, yet delightful traditional animation which is a so much needed breath of fresh air in the age of glossy CGI. Sincere in its 'awkwardness', it takes us to a high-tech laboratory, busy scrapyard, sunlit desert and all the way to a dark, underground lair, constantly keeping us or rather, our inner child, in the state of wide-eyed curiosity. 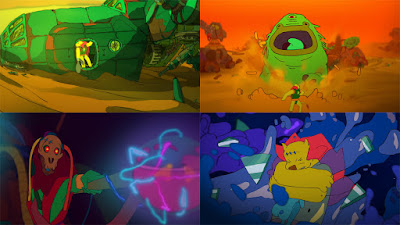