The Girl Without Hands (Sébastien Laudenbach, 2016) 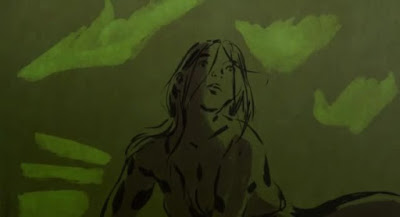 One of the lesser known Brothers Grimm fairy tales gets a remarkable adaptation with the hyper-stylized feature debut for French animator Sébastien Laudenbach. Rendered as a fauvist version of Asian ink wash paintings, The Girl Without Hands (La jeune fille sans mains) revolves around the impoverished miller's daughter (soothingly voiced by Anaïs Demoustier) who loses hands under her father's axe all because of his mindless contract with the Devil (Philippe Laudenbach).

The leisurely paced three-act story of goodness vs greediness and the onerous journey called life has a universal appeal, but the instances of full-frontal nudity, sex and violence (which involves a bit more than the aforementioned chopping) make it not quite suitable for the youngest. Notwithstanding this barrier, the film has a lot to offer, especially to the audience interested in the artistic portrayal of "Old Scratch" as well as the Faustian pact and its consequences. 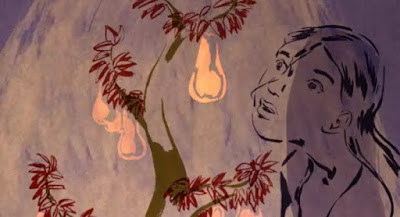 There also appears to be a feminist subtext to the narrative, given that the heroine is abandoned at her most vulnerable: firstly, when she leaves the mill and, subsequently, with a newborn child. Fortunately, she is graced by the River Goddess (Elina Löwensohn) and later helped by the Gardener (Sacha Bourdo) who are both a welcome change from the source work. Eventually - as a reward for her suffering - she meets a happy ending with a compassionate Prince (Demoustier's real life darling Jérémie Elkaïm). This is a fairy tale, after all.

However, the strength of Laudenbach's bittersweet fantasy lies within its minimalist, yet arresting visuals which demonstrate his brisk sense of line and color. Pulsating, intentionally "sketchy" and nearly abstract drawings are complemented by the delicate, unexpected brushstrokes to create the poetic, multi-layered pictures. It proves to be a powerful way of conveying the action and the characters' mental, emotional and physical state. (Think Isao Takahata's The Tale of the Princess Kaguya with even "airier" aesthetics or a "softer" and less malignant Belladonna of Sadness.) And with a musical veneer that is Olivier Mellano's dreamy post-rock score, The Girl Without Hands is infused with an atmosphere of gentle, calming melancholy and transformed into a modern classic. 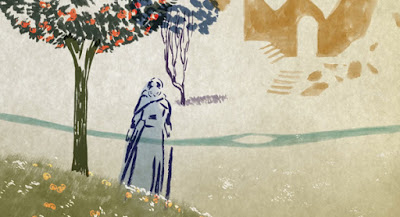