Bacchanale is a decidedly adult affair in which several hardcore scenes operate as a glue of sorts or even as integral parts of 'wet nightmare' sequences involving an Escher-esque fire escape, an open coffin at a fashion party, hands coming out of the wall in a shameless instance of Repulsion (r)aping, a graveyard where Ionic pillars are more common than tombstones, and a cavernous dungeon featuring a glass cage, all posing as hidden recesses of Ruth's troubled mind.

Deeply steeped in dream logic, the 'story' - if one can call it that - has a pretty good flow, and exists only to support the naughty exhibitionism of the Amero brothers. Their ambition in blurring the boundaries between experimental cinema and pornography is admirable, and mirrored in attractive visuals tinted in various colors, from ominous greens to sultry reds. Accompanied by Lem's largely atmospheric score and some haunting soundscapes, John's 16mm cinematography complements the cheap-looking sets in a charming way, as naked bodies writhe in ecstasy. And when the film tape grain is not powerful enough to fight the budgetary constraints, joining the struggle are extra smoke or S&M action! Campy acting adds a sourly sweet flavor to the proceedings. 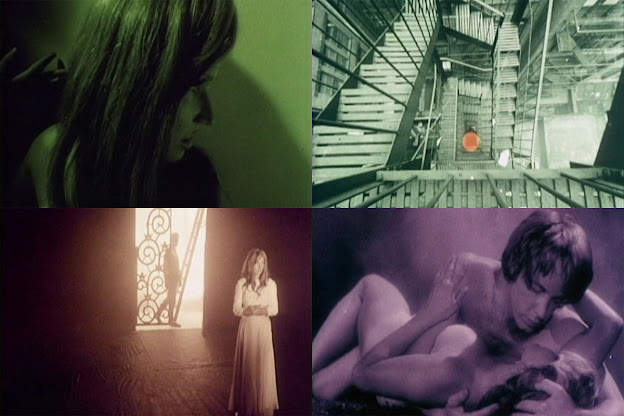