On the 16th and 17th of November, fans of experimental cinema had the opportunity to see a great selection of short films under The Unforeseen moniker, at the comfy venue of the Center for Cultural Decontamination in Belgrade. The Cine-scope program which included 27 titles competing for Grand Prix, Special Mention and Audience awards was divided into four sections: Delirium Archives, Raw Animation, 5(0) Shades of Experimental and Synaesthesia. Chosen as one of the jury members, beside professor of film editing Dragan Dimčić and film critic Ivan Velisavljević, I was introduced to all of the contestants' works beforehand, though watching them on the big screen (i.e. large white wall surface) is what made the experience amazing. This article aims at shedding some light on each of the presented films. 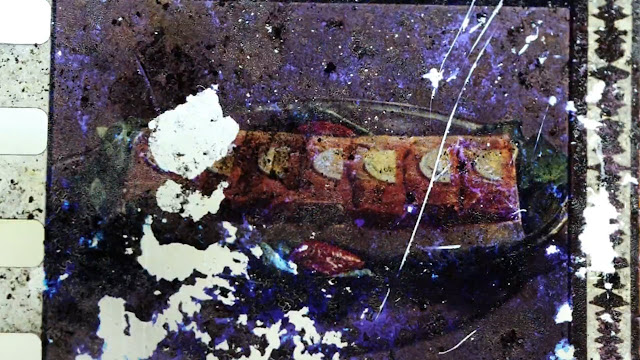 A cinematic equivalent of a jazz improvisation (the groovy soundtrack is to 'blame' for the comparison), Light Plays (Jeux de lumière) by Anne-Marie Bouchard is a beautiful collage of intoxicating colors, 'stains' and textures made of excerpts from the vintage educational documentaries transformed into a playful 'adventure' via scratching, drawing and animating on a 16mm tape. Giuseppe Boccassini's Debris appears like an anthology of subconscious associations formed within a (twisted?) mind of a dying person familiar with the structural films, video games and Experimental Film Society offerings. The most delirious of Delirium Archives and one of the Grand Prix 'ex-aequo' winners, the visceral, ferociously striking Never Never Land assaults the viewers' senses with a frenetic mélange of disturbing eroticism and cosmetic surgery interventions. Its creator, Amsterdam-based visual artist Michael Fleming, makes a razor-sharp comment on modern (or rather, eternal?) obsession with physical 'perfection' (as if it were achievable) and simultaneously demonstrates his enviable editing skills. Hungarian avant-gardist Péter Lichter serves a rhythmically delicious meal in his Nutrition Fugue, ironizing eating habits through the communist food adverts altered by exposing the tape to both good and bad bacteria. Having a whale of a time on his Volleyball Holiday, Ricardo Vieira Lisboa employs a scene from Hitchcock's Rebecca and a running gag with a burning celluloid film, emphasizing its fragility, especially when it's within Gremlins' reach - think Hollis Frampton's (nostalgia) 'adapted' for the new age. In ¡PíFIES!, Ignacio Tamarit turns lousy home movies into a stroboscopic smorgasbord of faded memories colliding to the music score evocative of the 70s. 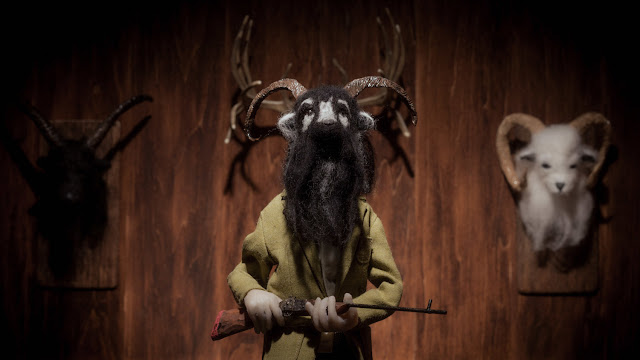 Joshua Dean Tuthill's bizarre, surrealistic stop-motion 'drama' Black Dog that won the Audience Award blurs the line between the Space Race and a seriously dysfunctional family of rednecks, giving a whole new meaning to the phrase 'better the devil you know than the devil you don't know'... or so it seems. Head-scratching moments are bound to happen. Matter Out of Place by Oona Taper combines painterly rotoscoping with frame-by-frame animation into a quiet (feminist?) exploration of fullness vs. emptiness, as the official synopsis and twitchy visuals suggest. Sara Jurinčić's commendable debut September 3, 2015 (3. rujna 2015) is marked by a deliberately messy amalgam of almost Pythonesque cut-outs and autobiographical documentary in which an 'off-screen portrait' of father and daughter emerges from the 'banalities' we read about in daily newspaper. Mathieu Girard utilizes various techniques to animate part Lynchian and part Švankmajer-esque extravaganza Bousche(s), touching upon several topics and endowing the titular organ with multiple meanings. Another firsttimer, Aleksandar Lazar, imbues his contemplative journey, Monstrosity of the Body (Monstruoznost tela), with an introspective dimension, achieving the atmosphere of transcendental calm via ethereal music, hypnotic narration (or more precisely, recitation) and monochromatic imagery that has the protagonist's body abstracted into (micro)cosmic dust. The ideal companion piece to Lazar's innermost visions can be found in Eternity (Věčnost) - a phantasmagorical mystery by the Czech-Korean animator Yeaeun Jang who illustrates the very fabric of primeval dreams with white pencil on a black background. Arash Akhgari addresses the alienation of modern man in a quivering ink-on-white miniature Out of Touch, whereas Carol-Ann Belzil-Normand produces a series of psychedelic WTF-eries around the brief, yet extremely weird clash of furniture and female body in Ultra. Blending Dadaist collages and childlike drawings, Sasha Svirsky 'speaks' of a universal desire to escape the monotony of mundanity in an invigorating absurdist comedy About a Woman Who Wanted to Fly Away (Про бабу, которая хотела улететь), whereby The Life of Insects novel by his compatriot Victor Pelevin springs to mind while visiting the dark world of Daniel Šuljić's minimalist B&W satire From Under Which Rock Did They Crawl Out (Ispod kojeg li su samo kamena ispuzali). 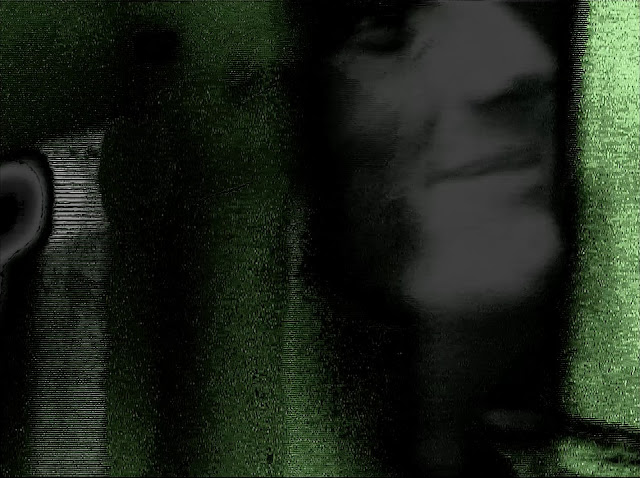 Completely silent and packed with a handsome cinematography in a boxy format, Alexander Bickford's Myelin portrays a young woman diagnosed with an unspecified (terminal?) illness, and plays out like a heavy, melancholy-fueled dream that could be inspired by the opuses of Maya Deren and Olivier Smolders. From Ecuador arrives an abstract, ghostly, slightly repetitive DV + VHS + Hi-8 phantasy El Diezmo (Jean-Jacques Martinod) set in a virtual or even unfathomable (prenatal / posthumous) realm, with 'a spirit voice' as our only guide. The 'Droste', aka 'mise en abyme' effect is applied to the grainy selfie-culture critique shaped as a meta-film of sorts in Please Step Out of the Frame by Karissa Hahn who takes a cue or two from the Japanese experimenter Takashi Ito. Josh Weissbach's 601 Revir Drive is one of the most 'abrasive' films in the selection, a baffling procession of incongruous pictures thick with raw poetry. Featuring barely readable hand-written subtitles and revolving around a peculiar 'conversation' between a pro-entomologist and Papilio canadensis, Tiger's Dialogue (Dialogue du Tigre) by Matthew Wolkow provides us with a poetical documentary prone to some visual 'gimmickry', such as split-screen and 'butterfly perspective'. 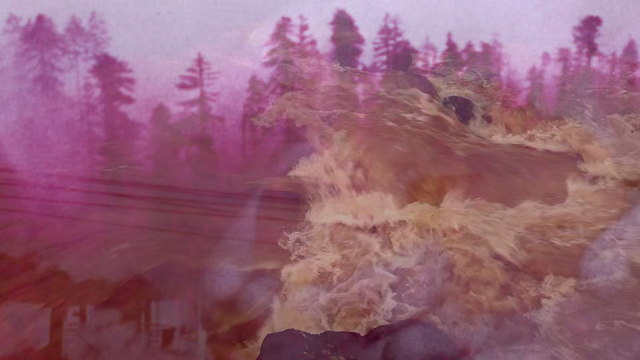 The second Grand Prix winner Sylvia Schedelbauer takes us on a journey into the farthest recesses of subconsciousness, weaving a flickering eco-parable around a boy's adventure in an enchanted forest. Her Wishing Well wishes you to wake your inner child and drink from the stream of free flowing thoughts, as the parallel dimensions assimilate into a redolent cacophony of colors. Also resonating with ecological sentiment is Atoosa Pour Hosseini's Antler (awarded with Special Mention) - a formally seductive cinematization of the cryptic Voynich manuscript. As challenging to decipher as the said codex, this oneiric, aesthetically pleasing puzzle erases the boundaries between fiction and documentary, and alchemically transfigures a botanical garden into a laboratory of evocative images and sounds. More scenes of Mother Nature - this time, shrouded in its gloomy veil - operate as the verses of a moody ode to the mountains which is also the title of Hrvoslava Brkušić's high-contrast 'photo-novel' Planine. Occasionally reminiscent of Kurt Kren's 3/60: Bäume im Herbst, this 'environmental essay' feels like a lost artifact from the past and, paradoxically, that is exactly what makes it refreshing. Kent Tate's Catalyst (which was reviewed at NGboo Art a few months ago) ads up to the confusion with each repeated viewing - whether it's a 'diary without dates' or a meditation on the dichotomy of the natural and artificial surroundings, it leaves you with a distorted, hard to describe impression. The oppressive, epileptic cine-phantasm Hypnagogia by Pierre-Luc Vaillancourt operates as a psychedelic throwback to the 80s; a volcanic blast of flashing lights, pulsating synthwaves and mind-altering hallucinations. And finally, Andreas Gogol's Xarussell spins you on a carousel of amorphous reveries, as elusive as a hummingbird drawn to a cherry-sized disco ball...
Објавио Nikola Gocić у 2:05 PM