YOU'RE ON THE BALCONY TALKING ABOUT YOUR DREAMS (Sebastián Jiménez Galindo, 2018) 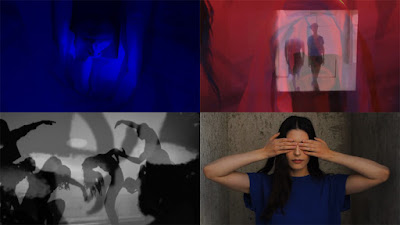 In his feature-length debut composed of works made between 2015 and 2018, Mexican-born literary student Sebastián Jiménez Galindo takes an essayistic approach to amalgamate collage and literature-based films with experimental documentaries and impromptu self portraits, trying to dissolve reality without losing touch with it.

There are many moments of sheer poetical beauty sprinkled throughout this 'anthology' whose greatest strength is also, paradoxically, its most glaring weakness. The over-reliance on (spoken) words, especially when they don't seem to carry much meaning, simultaneously serves and cripples the (daring) author in conveying the ideas of 'the impossibility of being invisible, of our intimacy as fiction and the newly-discovered truth that the Earth is flat once again', as the official synopsis notes.

On the other hand, Galindo makes the most of the lo-fi visuals, utilizing color filters, archive footage, glitch effects, dreamy superimpositions, topsy-turvy images, as well as various formats and aspect-ratios to put the viewer in a sort of a trance or rather, disoriented state further enhanced by occasional linguistic barriers (untranslated bits), cultural specificities, and the deliberate incongruity between the wild imagery and oft-deadpan voice-overs.

Intriguingly titled, his film carries some of the DNA of Rouzbeh Rashidi's early shorts, Splendor Solis by Daniel Fawcett and Clara Pais, Still the Earth Moves by Pablo Chavarría Gutiérrez, and the Dailies from the Dumpland series by Michael Woods, yet it comes off as less refined in comparison to the said contemporaries. However, one must not dismiss the passion of the young helmer who might surprise us in the years to come.