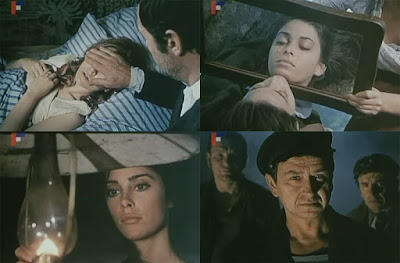 Based on the 1928 novel Something Is Drifting on the Water (Valamit visz a víz) by the Hungarian writer Lajos Zilahy, this little-known gem is considered one of the last films of the Czech New Wave movement. A great result of a troubled production which involved the Soviet invasion of Czechoslovakia in 1968, Touha zvaná Anada (lit. Desire Called Anada) is a noir-esque, thought-provoking psychological drama/mystery imbued with potentially supernatural elements.

Its challenging, retrospectively told story focuses on the tumultuous inner workings of a glum fisherman, János (an excellent performance by Rade Marković), whose quiet, wearisome life is turned upside down after he and his kind wife, Zuzka (Milena Dravić, radiant and brilliant), save an enigmatic young woman, Anada (the ethereal presence of Paula Pritchett), from drowning and welcome her into their humble home. As the conflict of his conscious and subconscious mind grows and his guilt rears its ugly head(s), the tragedy seems imminent...

Providing us with subtle hints to Anada's (divine?) origin, as well as to where reality ends and János's imagination takes over, Kadár and Klos create convincing characters, deliver a nuanced, engaging, borderline surreal narrative, and aptly visualize their (anti)hero's unhinged psyche (to paraphrase Denis Grunnes). The stark contrast of the hut's dimly lit, claustrophobic interior compared to the lush, liberating, yet somewhat intimidating openness of the sweeping Danube's surroundings reflect the 'small' man's struggle between maintaining the dull status quo and taking a risk to pursue the personal happiness - in other words, leaping into the Unknown. And though the bits of humor, unsolved rebuses and Vladimír Novotný's cinematography may not suit everyone's tastes, one can not deny the intermittent moments of sheer beauty supported by Zdeněk Liška's grandiose score.