A Disobedient Poem (for Colliding Storms)

A Disobedient Poem is my (hopefully, both witty and lyrical) gift to 'the latest mutant child to be born from the ungodly marriage of The Underground Film Studio & Experimental Film Society'. In other words, this humble piece of artwork is the answer to (instead the review of) Clara Pais, Daniel Fawcett and Maximilian Le Cain's collaborative short film - a delightfully nutty home video by way of esoteric/fragmented phantasmagoria - Two Storms Collide which was shot in the company of EFS members, during the snow storm of last February, in Dublin.

Two storms collide, and the Black Sun does not abide
by the flickering lights that hide under the bed. Divide,
by all means divide the wild mind into Jekyll & Hyde,
and follow the Honey Guide into the Old Unidentified.
Then ride, ride far away from the Suicide, ‘cause inside
the Bright Void you’ll find – yourself, utterly mystified.
Naked and purified, deny the answer that was clarified
and lay, nullified, with Odd Poets unified, side by side. 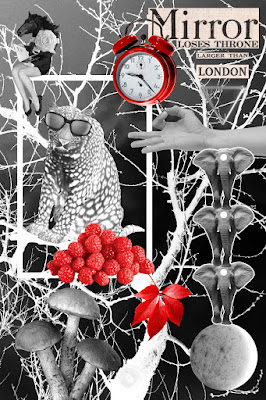