The first half of this abstract and idiosyncratic phantasmagoria sees us trapped in the coarse web of unsolvable riddles posed as unrhymed verses of a 'corroded' visual poem. Complemented by drony noises of eerie (backward spoken?) whispers, flapping bird wings, loud ocean rustle, ship horn and whatnot, Rashidi's grim, grungy and ultra-grainy visions put us face to face with Thanatos - veiled, fickle and having a twisted sense of humor. From the 'spit-painting' intro to nudists playing volleyball in Act I finale, Death appears as obscene and iconoclastic as Desire which takes control over Act II, whereby sky, plants, window dirt and everyday objects become some sort of apparitions staring into the void gazing back at us.

Looking as if it were shot with VHS or cheap DV camera (think Inland Empire), the feature's second part breaks the mold of one man's bland morning routine by blurring the boundaries between his lecherous reveries and tedious, yet somewhat mysterious reality. His meeting with a friend / Devil / other self is frequently interrupted by obscene sequences of women involved in sexual activities (such as felattio and masturbation), as well as by a static and symmetric shot of four trees accompanied by incessant birds' chirping. There's a certain screwball rhythm to Le Cain's provocative 'antics' which elevate sex to almost spiritual and metaphysical level, with Eros left to run wild and free, his member permanently erected.
Self Decapitation operates as a tricky double illusion - a performance rife with ambiguities that only the perverted, heavily stoned lions from the world of Lynch's Rabbits could make clear in an instant. 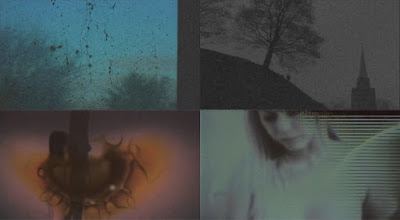