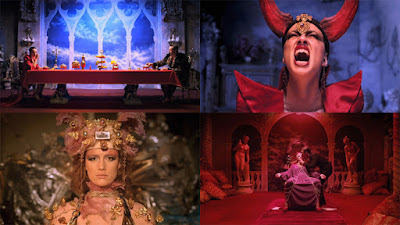 In his sophomore, crowdfunded short film, Adan Jodorowsky proves the idiom that apple doesn't fall far from the tree. Brimming with bizarre and esoteric imagery, The Voice Thief is based on the eponymous short story written by the author's father - the master surrealist and spiritual guru Alejandro Jodorowsky.

This extravagant musical-fantasy-mystery stars Asia Argento as an opera singer, Naya, who loses her voice during the strangulation session with her husband Noev (Adan's brother Cristóbal). She threatens to commit suicide, so he is forced to embark on the nocturnal odyssey in order to recover her vocal cords, becoming the titular antihero in the process.

Following the opening scene in a crowded theater, with a quartet of seminude blonde critics sitting in a front row, is an outré adventure involving two transvestites (a midget countertenor whore and a chubby bass queen), scantily clad saint with a miraculous urine, an armed squad and a hanged ship. (Not to mention a vivid snake-birth hallucination during Naya's debut and a horned tantrum.)

Surreal, fetishistic, iconoclastic and rich with the craziest of details, The Voice Thief is a type of film rarely seen these days, like an unholy cross between Alejandro Jodorowsky's wildest and weirdest ideas, Dario Argento's most baroque horrors and Nicolas Winding Refn's stylish provocations. Its lavish colors and textures, the eccentric costumes and tastefully kitschy sets are wonderfully captured by the keen eye of DP Alexis Zabe (who collaborated with Reygadas on Stellet Licht and Post Tenebras Lux) in a long series of breathtaking visual compositions. The flamboyantly kaleidoscopic aesthetics are complemented by the French musician Rob's 80s-sounding score.
A must-see for the fans of experimental cinema!