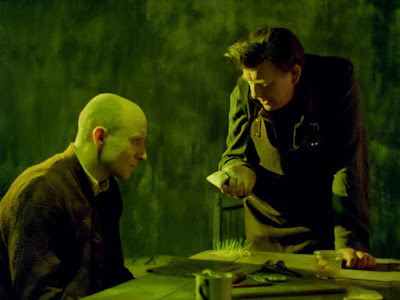 Based on Gustav Meyrink’s novel of the same name, Golem is a masterclass in feverishly disorienting atmosphere established through a puzzling, decidedly incoherent narrative, oppressive amber-green lighting, the crumbling dystopian setting of dispiriting grays, and insidiously hushed music theme which intensifies the overwhelming feeling of inescapable dread. Relentlessly irrational, to the point of distorting the viewer’s own perception of reality, this tautly directed nightmare engraves itself into one’s memory with some of the sharpest cinematic tools.
2. Egomania - Insel ohne Hoffnung / Egomania: Island Without Hope (Christoph Schlingensief, 1986) 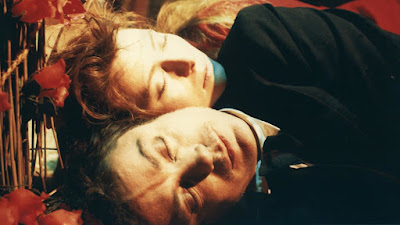 “I saw the Devil. He was more beautiful than me.”
A ruthlessly anarchic phantasmagoria, Egomania feels like an unholy cross between Zwartjes and Jarman, with bits of Ottinger and Żuławski thrown in for good measure. It frequently subverts your expectations and keeps you in the state of revelatory befuddlement, as it reaches the deepest and darkest levels of both your subconscious and unconscious mind. Christoph Schlingensief goes absolutely nuts with delightfully abrasive visuals, bizarre musical choices, ravingly poetic dialogue, freakishly fragmented narrative, and decidedly hectic editing, as the entire cast follows him on the bumpy path of creative lunacy. Leading his colleagues is legendary Udo Kier as Baron/Devil/Devil’s Aunt (may be one and the same character?) who munches the scenery with great gusto, and spits it all over the others, with the ethereal Tilda Swinton in an understated performance acting like his angelic counterbalance. 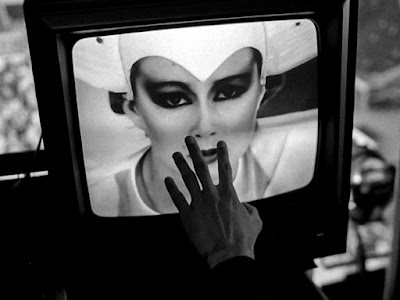 Piotr Andrejew comes extremely close to his compatriot and namesake Szulkin in building the oppressively alluring atmosphere of growing despair in a polluted dystopia, but his unorthodox sci-fi romance is imbued with the sense of (slightly twisted) tenderness emanating from a man-child hero – ‘sentimental idealist’ Jan (the superbly whimsical performance from Michał Juszczakiewicz). Stunningly lensed in black and white that emphasizes the bleakness of the retro-futuristic setting, and backed by moody jazz & synth tunes that lend it a noirish edge, Tender Spots has its love triangle story distorted through the prism of toxic ambition embodied by Jan’s vain girlfriend Ewa, the tottering system, and unlikely friendship with a little girl who seems to be the only person – beside the protagonist, that is – rejecting conformity and seeing the UFOs... 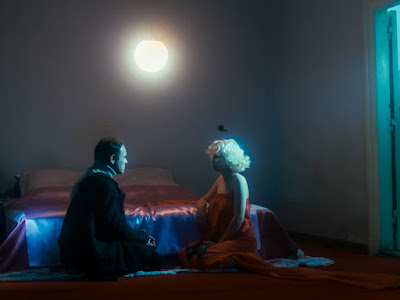 Kafka meets Orwell in Piotr Szulkin’s sophomore flick – yet another brilliant piece of dystopian fiction that still feels frighteningly relevant. Yes, it is quite ‘on the nose’ with its allegory of authoritarian regimes and manipulative power of the media, yet it is so well made, that you won’t be able to resist it. Instead, you will just want to keep resisting the toxic emanations from the global cesspool of defamatory information (unless you’re a white sheep). Dipped in steely grays and coolly blues, this confrontational sci-fi drama is directed with red-hot burning passion that leaves its marks in details. Also praiseworthy are superb performances, particularly from Roman Wilhelmi portraying the oppressed hero who delivers a memorable (and here, partially quoted) speech by the end:
“From the TV chaos you choose the truths you find as convenient. You accept only what confirms your conviction that passivity is a virtue and a necessity. Because this is exactly what you want to believe. You cry, you feel sorry for yourselves. And then what? You sit in front of a TV set. You feel absolved. More human than those you look at. And you look at people who are just like yourselves. Just as hypocritical, just as weak. Just as submissive...”
5. Szenvedély / Passion (György Fehér, 1998) 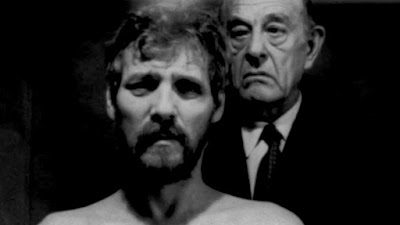 Based on James M. Cain's novel The Postman Always Rings Twice and co-written by Béla Tarr whose influence is obvious right from the opening, 6-minute-long one-taker, György Fehér’s swan song – a rural neo-noir – is a film of immense formal strength, depressingly and stiflingly poetic in its languorous pacing, constant raining, foreboding silences and grainy chiaroscuro visuals. Counteracting the tension concentrated in the shadows as dark as the abyss of human treachery is a sole breather that sees the lovers bathed in light peacefully reclining in bed.

What a powerful debut! Nick Rowland delivers an intense and engaging character study, eliciting excellent performances from his entire cast, particularly from Cosmo Jarvis in the impressive leading role. Supported by always reliable Barry Keoghan, and utterly charming Niamh Algar, Jarvis portrays antihero Douglas ‘Arm’ Armstrong – an ex-boxer enforcer for a drug-dealing family – with a rugged sincerity, pronounced physicality and deeply felt emotion. All the subtleties of his and his colleagues’ micro-acting are captured with clockwork precision in Piers McGrail’s eye-catching cinematography that emphasizes the magnificent beauty of Irish countryside, and ostensible peacefulness of a small town where the (brutal and tragic) story is set. On top of that, an unobtrusive, yet evocative score by Blanck Mass serves not only as a complement of the tip-top visuals, but also as a brooding soundscape for Arm’s deteriorating inner state. 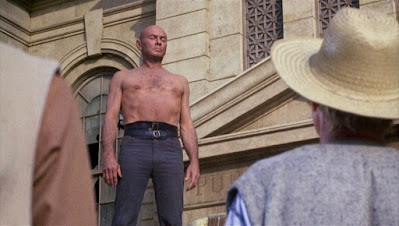 Yul Brynner and Max von Sydow lend some serious gravitas to this slightly pulpy, yet mighty fine piece of post-apocalyptic cinema, the former portraying a stoic, knife-wielding fighter, Carson, and the latter in the role of an intelligent leader of a small commune living from hand to mouth in dilapidated New York. A simple story of survival – penned and helmed with cool effortlessness and keen sense of pacing by the father of the cult martial arts flick Enter the Dragon – commands the viewer’s attention even in its most prosaic portions turned into stylish scenes by virtue of Gerald Hirschfeld’s strikingly grungy 35mm cinematography. However, what makes The Ultimate Warrior stand out from similar offerings, as it anticipates Hill’s The Warriors and Miller’s Mad Max, is Gil Mellé’s brilliant experimental jazz score coming into eargasmic prominence whenever the tension rises, particularly during the film’s final and most exciting third set in the underground tunnels. 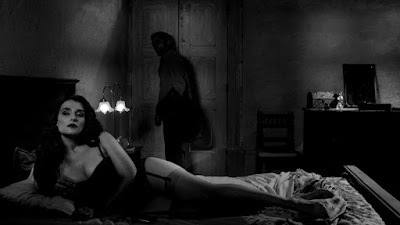 Boasting a hyper-style to die for, and oozing with dense, smoke-filled atmosphere, Ornament and Crime plays (amazingly well!) like an extended riff on or rather a passionate love letter to film-noir aesthetics, with its trench-coated (anti)hero, shifty femme fatales, and pretty much everyone and everything else deeply planted in the blackest of shadows. Perfectly complemented by moodily experimental music from Paulo Furtado and Rita Redshoes, Jorge Quintela’s stunning cinematography grabs the viewer’s attention right from the get go – a symmetrical medium shot of the protagonist’s back against the distant city lights – and never loosens its grip. His camera rarely moves, yet it plunges you with great force into each of meticulously composed tableaux vivants, as the deliberately stilted narrative blends Godardian irreverence, de Oliveira-esque coldness, and hints of Lynchian absurd. It goes without saying that what Areias created here is an acquired taste – a cinematic treat for the open-minded. 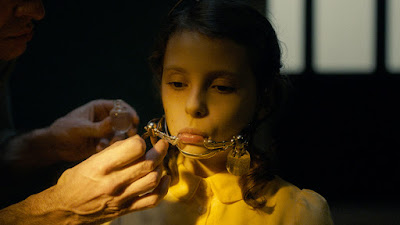 Across the waveless sea of ambiguity,
Shady ciphers are floating aimlessly...
The latest offering from Lucile Hadzihalilovic (Innocence, Evolution) is an aesthetically triumphant mystery (with a capital M), daring, stubborn and uncompromising in its following of the dream / nightmare / fairy tale logic, as well as in its deliberate pace, at the expense of its immersiveness. A weird premise of a meek and reticent girl whose dentures are made of her own frozen saliva (!), and a bizarre subplot which involves her ever-frowning guardian, a waitress with a disfigured face, and a Mephistophelian figure that binds them through distorted time, open portal to a dreary, eerily surreal world where silence shrouds all meanings and answers (to some sinister, undefined conspiracy) in an opaque veil. Its aftertaste is one of utter bewilderment and inexplicably sweet fear that reality may dissolve any minute...
10. Baagh / Tiger (Sourish Dey, 2022)

Something is rotten in the state of India whose national animal – represented by a folk actor who performs as a tiger – is subjected to a Kafkaesque process conducted by sinister Mr. Jaiswal aka the Goat in the formally bold sophomore feature from Sourish Dey. Filtered through the prism of the Beckettian absurd, the fractured, off-kilter narrative is built on the vicious loops of oppression, seeing a bunch of bizarre characters – all turned into symbols and ciphers – desperately trying to define or at least express themselves reflecting upon the figure of Tiger. They are pulled together through a series of visually alluring vignettes, raging from theatrical (feat. the King with his Assistant, and evoking Majewski’s Gospel According to Harry with its outdoor set design) to Godardian to Avikunthak-like, all captured in crisp B&W, and occasionally overlaid by SMPTE color bars, as if indicating those poor souls are being tested by both the (simulacrum of) society, and some higher power(s). Dey elicits solid performances from his cast, particularly from Biswanath Basu (as Tiger) whose sweaty, tortured face easily burns into one’s memory. 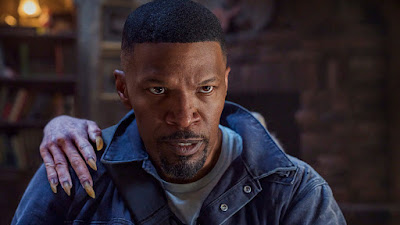 Stunt-master J.J. Perry delivers plenty of (summer) fun in his self-consciously goofy directorial debut that follows a Streets of Fire-like rule of cool, replacing leather jackets with aloha shirts, and biker gangs with vampire cartels. A highly energized blend of buddy comedy, martial arts, car chases and gory mayhem that sees a great number of contortionist bloodsuckers ruthlessly shot, dismembered and/or decapitated, Day Shift boasts some gripping set pieces and great chemistry between the cast members fronted by Jamie Foxx and Dave Franco. It made me wish it were longer, with its ‘mythology’ surrounding the baddies deepened. 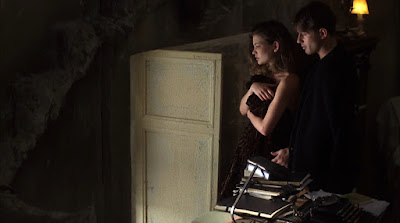 Audie England and Costas Mandylor engage in a ‘seductive pouting’ competition throughout Zalman King’s sultry pre-WWII melodrama which blends softcore eroticism, saucily saccharine poetry and the atmosphere of portending doom to surprisingly solid effect. As it touches upon the themes of communism, fascism and same-sex relationships at the dawn of chaos, Delta of Venus provides the viewer with handsome visuals whose allure doesn’t depend solely on the actors’ pulchritude. Cinematographer Eagle Egilsson does a commanding job in his first feature film, with George S. Clinton’s subtly sentimental score enveloping the autumnal imagery in a soft aural veil.
Објавио Nikola Gocić у 11:31 AM