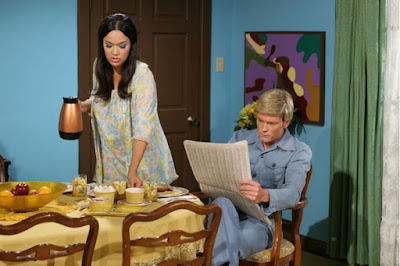 Anna Biller's naughty, independently produced debut looks and sounds exactly like the early 70s sexploitation flick which she skillfully mocks, satirizes and pays a loving homage to, all at once. Starring herself as Barbi without 'e' - a bored housewife who presumes the identity of the titular libertine - Viva is amusing and refreshing in equal measures.

As in the last year's campy thriller The Love Witch, Biller is the multi-hyphenate in charge of directing, writing, editing, designing sets and costumes, even animating a short psychedelic sequence - all with an assured hand. Drenching everything from walls, through mini dresses and all the way to velvet cushions in saturated colors and trip-inducing patterns, she creates an uninterrupted string of visually stunning shots which make for an unforgettable cinematic experience. 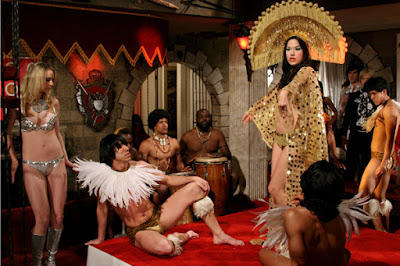 In her sophomore, ironically titled feature, the Swedish director Hanna Sköld tackles one of the most sensitive topics - child abuse. Drawing inspiration from her own unpleasant experience, she pulls no punches and establishes an atmosphere so depressing that some of Bergman's gloomiest works seem hopeful in comparison.

A bitter, ice-cold story revolves around a pubescent girl, Eini (the pale Blanca Engström, carrying the movie on her slight shoulders), who lives with a despotic father (an intense performance by Lennart Jähkel) on a small, remote farm, deep in the forest. The strolls amongst the trees and the tin-boxed correspondence between her granny and great aunt are her only relief from the drudgery of isolated day to day existence.

However, a fantasy world conceived out of Eini's "ennui" is not a happy place where she can escape grim reality. Quite the contrary - rendered in rudimentary, childlike stop-motion animation, it reveals a history of domestic violence and antisocial tendencies which brought forth her distressing childhood. To a certain degree, it does contrast the grays of a dysfunctional family (chamber) drama, but it is definitely not a sugar coating one might expect from a puppet-show.

Brutally honest, Sköld shows no mercy to the viewer, favoring the austere, Tarkovsky-meets-Nordic-dread imagery (kudos to the Polish DP Ita Zbroniec-Zajt) over sparse dialogue, music and narration. With bold, precise strokes she paints a harrowing portrait of a child forever scarred by parental misconduct and grants her heroine a future of uncertainty and many unresolved issues. And when the festive title finally comes to fruition, Eini's mental state is seriously impaired.

Another coming-of-age tale takes us back to the 80s Midwestern farm, during the economic recession which many described as the worst ever since the Great Depression. Told from the perspective of its 11-year-old heroine Gertrude Marie Jaeger or, simply, Gitty (superbly played with wide-eyed innocence and insatiable curiosity by the vastly talented Peyton Kennedy), it blends poetic reveries and dark machinations into a stylish, yet flawed "fairy tale thriller".

We have caring parents (Kip Pardue as a father, Abe, and Marci Miller as a mother, Sarah), a brutish older brother, Martin (Gavin MacIntosh), a witch figure in Zuleikha Robinson's Vera and a wish-fulfilling genie in Richard Schiff's big-city businessman, Jonathan, all entangled in a shady save-the-estate scheme which might not end in happily ever after.

The first-timer Anne Hamilton shows great ambition in experimenting with symbolism and the narrative structure, leaving some loose ends here and there, between the inscrutable dreams and painfully obvious reality. Her "mishits" could be attributed to Gitty's naiveté and point of view blurred by bedtime stories and later, an ethical dilemma.

On the other hand, she and her cinematographer Wyatt Garfield deliver plenty of inspiring, aesthetically refined compositions that work both individually and in the context of the beautiful whole complemented by Gingger Shankar's befittingly haunting score. Even though her American Fable takes a cue or two from Andrew Wyeth's paintings (Christina's World), Guillermo del Toro's dark fantasies and her mentor Terrence Malick's meandering dramas, it comes off as a solid and quite original piece of rural Americana gothic.

The first all-female directed horror anthology doesn't disappoint, yet it doesn't revolutionize the genre either. In other words, it is a slightly above average mix of interesting concepts and fine execution - nothing more, nothing less. Three out of four women in command explore the ups and, particularly, downs of motherhood, whereby the last member of their quartet plays a different tune for the sake of variety.

Jovanka Vučković's The Box is a cool, metaphysical, Twilight Zone-like mystery focused on a family whose members take a fatal diet prior to Christmas and following a subway encounter with an enigmatic man carrying a "gift" wrapped in red. Its highlight is a nightmarish scene in which mater familias's suppressed worries and fears are metaphorized through a gruesome, darkly humorous feast.

Following is a campy extravaganza The Birthday Cake whose musician-turned-filmmaker Annie Clark (aka St. Vincent) subverts a few horror clichés, from a creepy maid (who looks like The Duke of Burgundy extra) to noises from the wardrobe, into tense and somewhat illogical preparations for a birthday party. This effective, yet not-at-all-scary psycho-drama (for the lack of a better term) suggests that being an overprotective parent doesn't mean your child won't end in a shrink's office sooner or later.

Roxanne Benjamin is the "rebel" of the group, as her Don't Fall is not concerned with mother, but rather with the pre-Native American era petroglyphs which thwart the field trip for four friends. This throwback to the cheesy 80s creature feature conveys a simple message: "Don't believe in crap or you might morph into one!"

And the last, but not least vignette Her Only Living Son is authored by the most experienced of the involved helmers, Karyn Kusama, whose obsession with cults (remember The Invitation) is transformed into an easily readable love letter to Polanski's masterpiece Rosemary's Baby. Revealing more would lead us into the spoiler territory.