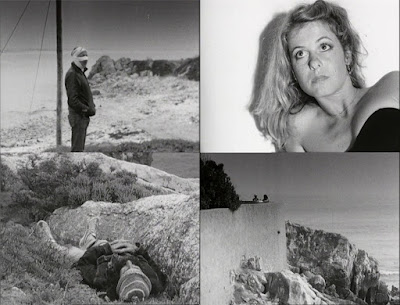 Vanishing Point (originally, Point de fuite) has to be one of the most absurd dreams ever captured on screen. Described as 'a B-side to his (Raúl Ruiz's) magnum opus City of Pirates' at MUBI where it's currently playing, this experimental 'mystery drama' (for the lack of a better term) revels in bewildering non sequiturs involving an unnamed protagonist portrayed by Steve Baës (who's called by his first name by Ana Marta's enigmatic faux femme fatale).

At the beginning, he arrives on an island by cab (!), his head wrapped in bandages. Later, he says he had an accident at work, but soon after we see him making sketches for the cover of a book that will contain the islanders' stories (or something along these lines). In the meantime, he frequently plays cards with his landlord (Paulo Branco) and has plenty of strange encounters - several with Anne Alvaro's poker-faced secretary-like character who fills him in on the doctor's arrival and tells him about her weird nightmare. There's a couple of siblings living down the street and a murder occurs or is imagined by Steve.

And before you can say 'a boat turned into a pencil turned into a shark, as a sea turned into a Chinese soup, but not a bamboo one', you have been mind-boggled to the point of no return or rather, vanishing point. The preposterous dialogues that at times seem to be improvised and at other times pretty melodramatic sound exactly like utter balderdash one conjures up during REM phase. Complemented by the disorienting score and grainy grays of splendid B&W cinematography, they raise not only eyebrows, but many questions as well.

Who is the actual hero/dreamer of a puzzling story - Baës or Ruiz? Is he the illustrator or someone else illustrates him? What's with all the hate for eggs and chickens and is it the reason to leave the States? Would you accept fish from a stranger - a red herring, perhaps? Why would anyone stick a love letter into a bottle of beer? If your uncle Olaf speaks Italian, does that make him a traitor? In case you don't have uncle Olaf and do have a sister, has she ever asked you to promise her you'll go to hell? Who is a hermit lying on the rocks? Do answers even matter? Does anything at all matter?

As you might have already guessed, Vanishing Point is a tricky illusion and not a movie you can munch popcorn along with, because there's a great chance you end up with salt in your eye... 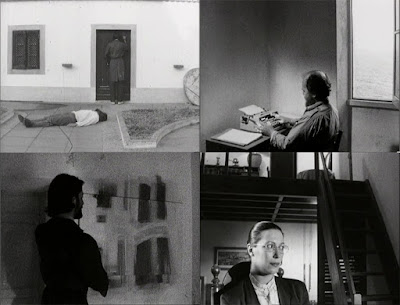