Taking cues from Mad Max and The Terminator, RoboCop and Harryhausen’s stop-motion classics (mixed with an Alien influence?), Keita Amemiya subverts both Christian iconography and the naïveté of tokusatsu shows to deliver a stylish, highly entertaining post-apocalyptic actioner. He borrows the villain of the 70s TV show Android Kikaider (remade into anime series in 2000 and live action movie in 2014, both solid) and turns him into a dark hero of the anti-utopian future.

Found in a fortified underground room by a group of treasure hunters, Hakaider catches his ‘rescuers’ off guard and introduces them to gruesome deaths, prior to jumping on his Harley and riding off to Jesus Town (sic!). Once there, he joins the resistance movement – a black leather-wearing punk gang – to fight against a despotic, orchid-loving ruler, Gurjev, who looks like a seraphic singer of a New Romantic band, commands an angelic android Michael with a twisted sense of justice, and spreads love and peace through some serious brainwashing of criminals and disobedient citizens. Add to that a short-lived romance between Hakaider and a lovely rebel, Kaoru (whose dreams give off Excalibur vibes), and you have yourself a delightfully cheesy cyberpunk fairy tale.

As you may have noticed, neither subtlety nor originality are Amemiya’s strong points, yet he manages to blend everything but the kitchen sink into an idiosyncratic piece of B-cinema, immersing the viewer into a bizarre world of bulletproof cyborgs and ‘bleeding’ architecture. Guided by the rule of cool and ignoring many other rules such as continuity, he creates an audacious live-action equivalent of a 90s anime worthy of a cult status. Similarly to Walter Hill’s Streets of Fire, his fantasy is set within a teenage reality, one that uses story as an excuse for Hakaider to kick the multitude of asses in creative ways, and employs various tools – matte paintings, practical effects, digital graphics, eccentric costumes, dashes of ultraviolence and clouds of white feathers – to keep the visuals constantly engaging. 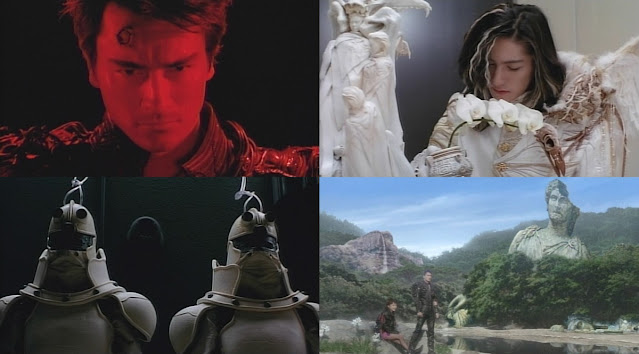