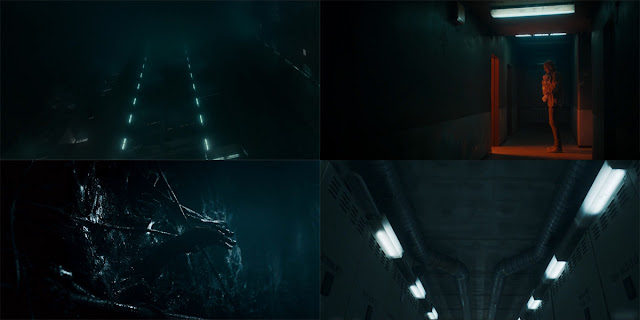 A very human type of deviousness gets an uncanny cosmic boost in an 8-part mini-series Hausen co-written by Till Kleinert of Der Samurai fame and Anna Stoeva whose previous credits include production of several documentaries. Set in a Plattenbau complex - a concrete colossus straight out of a Brutalist hell, it focuses on the dreary existence of its eccentric residents some of whom are addicted to a strange substance extracted from a black ooze that clogs the worn-out pipework. The arrival of a new caretaker, Jaschek (Charly Hübner, playing the role with imposing physicality), and his son Juri (Tristan Göbel, channeling teen angst with sulking conviction), paradoxically accelerates the erosion of both the decaying building and already frail community.

The monolithic skyscraper of a labyrinthine interior where the bulk of the puzzling story takes place is turned into a malicious character linked with a presumably alien entity in a symbiotic relationship. Feeding on fears and suffering of its 'inmates', this highly claustrophobic prison of impossible architecture (The Shining influence, no doubt) seems to be detached from the reality of the outside world which is only sparsely referenced to or glimpsed at - it follows its own whims and (twisted) logic, as it leads the weakened tenants down the path of madness and violence. Such an oppressive environment proves to be a fertile ground for mind games played not only against the protagonists, but vs. the viewer as well, with a bleak, pre-apocalyptic atmosphere increasingly thickening towards a Space Odyssey-inspired conclusion. Speaking of inspiration, Kleinert, Stoeva and Stuber take cues from diverse sources (Lovecraft, Giger, Lynch, J-horror, just to name a few), and yet all of the familiar elements fit so well together, pulling us deep into a whole new universe.

The authors stubbornly refuse to provide answers to the great majority of constantly raising questions, peeling only the most superficial layers of mystery and thus letting the darkness and dread (of the unknown) creep under your skin and then cloak you completely. Although they do touch upon numerous real-life problems, such as drug abuse, depression, pedophilia, neo-Nazism, domestic neglect and institutionalized corruption, they manage to escape the trap of pronounced metaphorization which plagues many recent genre offerings, allowing the very cinematic qualities to shine through. Stefanie Kromrei's flawless art direction and Peter Matjasko's moody cinematography of cold, desaturated colors and dim, often flickering lighting wonderfully emphasize the bizarreness and obscurity of the proceedings, wrapping the series in the appropriately and attractively tenebrous images. Long hallways defined by decrepit walls, apartments that have seen better days, and a vast, dampy basement - an industrial jungle of electrical and heating installations - all come with a strong visual identity, as well as a (putrid) life of their own, making Hausen an equivalent of a vivid nightmare. What elevates this nightmare to the next sensorial / experiential level are a haunting score by David Chalmin and Bryce Dessner, and an imposing sound design by Kai Tebbel who enhances every whisper, buzz and hum to bone-chilling effect. 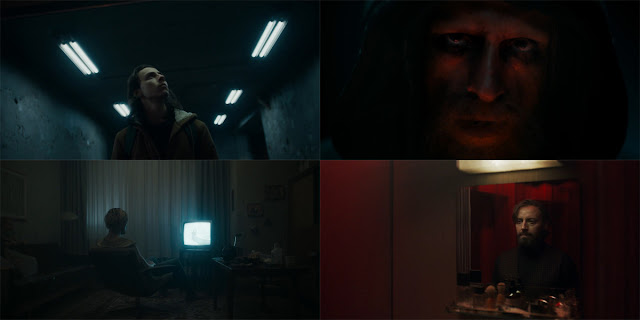