"The act of dreaming is difficult, because it is an act of passivity."

The final Moon Tiger Movie begins with an arm emerging from the water and grasping for a raft. Could that be an artist clinging to his art - a life-saving act or the dearest of lovers? Whatever the answer may be, Maximilian Le Cain doesn't leave much room for contemplation, as the viewers soon find themselves distracted by vintage erotic provocations. What follows in the elusive procession of non-sequiturs is a mellow stream of poetic voice-overs operating as an overture to what may be interpreted as an unconventional, heavily deconstructed romantic drama in which different actors portray a couple of main characters.

Of course, this is just an oversimplification of MTM4 which - unsurprisingly - comes off as pretty challenging, formally as well as content-wise. It appears as the most personal of the bunch - a film-performance defined by life defined by cinema, as well as the most talky and lyrical, with the author's emotions swinging back and forth, mirrored in the brittle images. Often mirage-like (there are even the shots of a hotel called La Mirage), they are accompanied by muffled, melodramatic music and dialogues from the last century (B&W?) classics, but there's also Tchaikovsky's Swan Theme jumping in when you least expect it.

As the aural and visual harmonically clash, Le Cain plays with us as if we were puppets stolen from a claustrophobic doll-house - at one point, we're lost in a neon-lit hallway and the next we know, we are walking across the bridge and inhaling the smog of a gloomy urban surrounding. In a flickering assault, the female protagonist repeats "there's blood everywhere" which portends an icky zombie-flick homage - a metaphor for a consumptive relationship, perhaps? Both man and woman of that relationship are seen suffering, embracing their loneliness in various ways - if he is the creator's alter ego, then she is his muse or the lovely embodiment of his creation... In the memories of their love, we ascend to the chaotic and crumbling world of dreams. 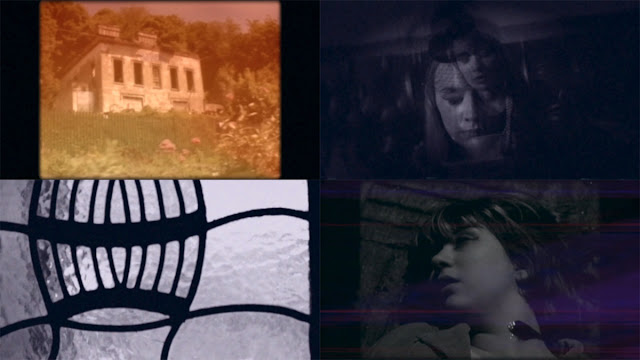