☼☼☼☼☼☼☼(☼) out of 10☼
Featuring one of the best-looking recent opening sequences which also introduces the film's leitmotif of marble painting, The Crescent is a solid Canadian chiller from the second-time feature director Seth A. Smith who casts his own toddler Woodrow Graves in one of the two central roles (the other being Danika Vandersteen in her shaky debut), and lulls you into a state of melancholic dream turned insidious, undulating, psychologically disorienting nightmare via deliberate pacing, extremely unnerving score, aspect ratio changes and jaunts into surreal territory which make the geometrically rigid architecture of the exquisite beach house setting quite Escher-esque. 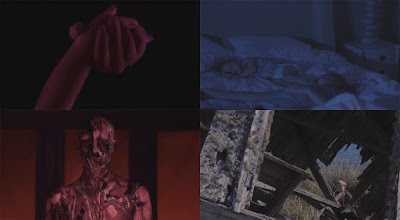