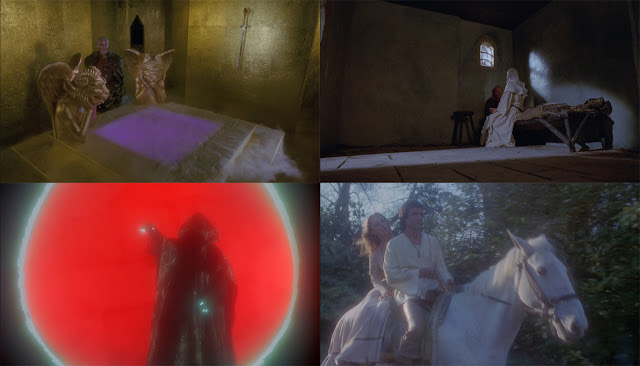 If I had seen Hawk the Slayer three decades ago, it would’ve certainly made one of the fondest memories of my childhood, so I guess that this feeling I have now could be called ‘anemoia’. A timeless story of good vs. evil and siblings rivalry, this hammy, yet immensely enjoyable and dynamically paced ‘sword & sorcery’ flick takes cues from Dungeons & Dragons lore, westerns and legends of yore, coming across as a spiritual prequel to plenty of hack and slash / beat ‘em up games of the 90’s, as well as to Record of Lodoss War anime.

A valiant, mindsword-wielding hero, Hawk (played with low-key stoicism by John Terry), seeks to avenge both his father and beloved one who died at the hands of his older brother, Voltan (Jack Palance who chews the scenery like there is no tomorrow, exemplifying evil as he so often did), and accompanying him are a motley crew (an elf, a dwarf, a giant and a warrior) guided by a blind seer / sorceress (Patricia Quinn of The Rocky Horror Picture Show fame, speaking in a mystically hushed voice). Their combined efforts are also required by a flap of nuns whose abbess has been kidnapped by the forces of darkness drawing power from a mysterious black wizard who could’ve easily inspired the Shadow Weaver character from Filmation’s ‘The Secret of the Sword’ cartoon.

And so, the phantasmagorical adventure begins, taking you into a spiderweb-infested heart of the forest, a cave filled with glowing light, an ascetically furnished monastery, a Gothic arched, skull-decorated chamber of High Abbot, and a minimalist castle interior with walls covered in gold, and two gargoyles staring into a pool of smoke. The sets are obviously designed on a tight budget, but there’s something intensely charming about them, and not to mention those enchanting matte paintings and oh-so-80’s neon special effects which – supported by a groovy, delightfully off-kilter disco score (Harry Robertson) – add to the film’s irresistible naivety. Speaking of music, it is certainly a most unexpected choice, and somehow, it works admirably or rather, psychedelically well with the pseudo-medieval visuals captured in hazily dreamy cinematography by Paul Beeson. It goes without saying that an extra dose of suspension of disbelief can significantly enhance the viewing experience. 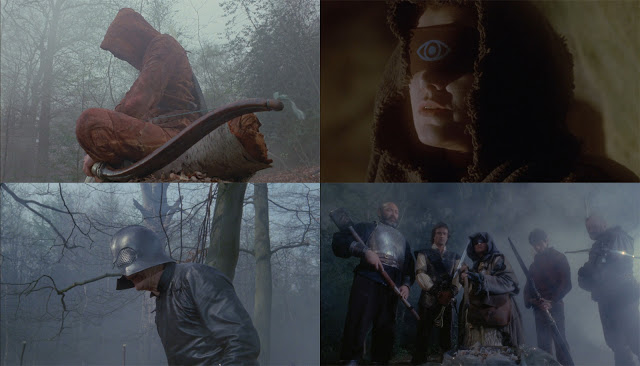