I Wonder If Daylights Were White Nights or Something Childish But Very Natural (Sibi Sekar, 2022)

A hypnotizing, four-minute-long sequence of abrasive audio-visual abstractions soaked in shadows and blue lights opens a portal into a strange, mysterious world which exists (and resists) in the intersection of cinema, our reality, the author’s creative imagination, and the very concept of spectatorship. This resolutely defiant ‘microcosm’ is a non-time-space parallel to, or rather, emerging from and collapsing into what filmmaker and founder of Experimental Film Society Rouzbeh Rashidi calls Luminous Void.

Simultaneously a witty meta-deconstruction of film and brooding Orwellian psychodrama with an essayistic twist, the intriguingly titled medium-length offering from Sibi Sekar – a young and extremely talented director from India – blasts its way into the pantheon of bold ‘cinexperiments’. As its characters – lovers Regina Olsen and Man Ray – become aware of being nothing but ‘portraits’ under our Gaze turned into a (non)entity antagonist, we are treated to a fascinating series of predominantly bleak / dystopia-evoking visual compositions ranging from the fourth-wall breaking tableaux shot in front of the projection screens to loving tributes paid to auteurs such as Marguerite Duras and Jean-Luc Godard. Intoxicatingly sinister soundscapes (many kudos to Marius Paulikas!) thicken the atmosphere that stems from the oppressive power of observation emphasized by Mahesh Mani’s expressively moody, dimly lit cinematography.

I Wonder If Daylights Were White Nights or Something Childish But Very Natural is not childish at all, despite the playfulness at display – it is a thought-provoking, anti-illusory work of art that strives to awaken the film’s hidden potentials, with the intention of incessant re-evaluation, and involve the viewer much deeper than any given mainstream flick.

Note: The review is based on a screener provider by the author. 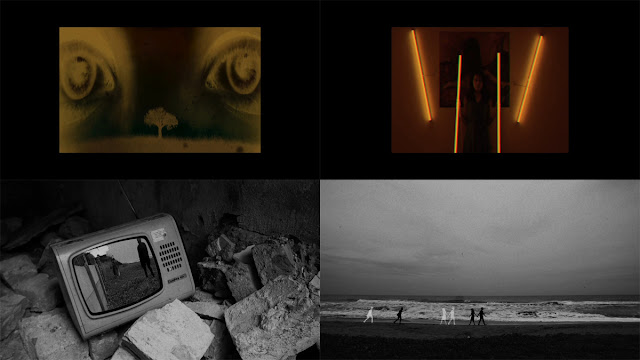