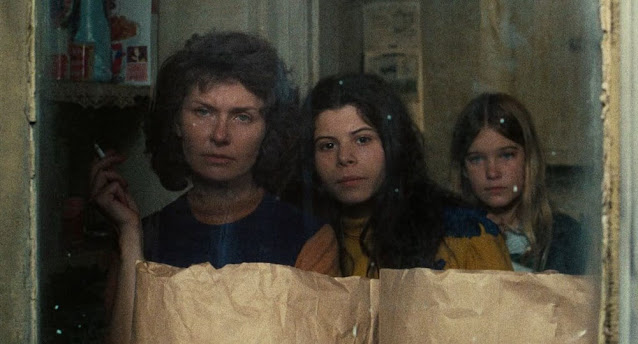 Joanne Woodward gives a force-of-nature performance in a bitterly funny, emotionally intense and tautly directed drama whose depressing visuals are elevated by colorful characters. The strong impression it left me with can be summarized in a line that brought tears to my eyes: “My heart is full!” A masterpiece.
2. Shatranj-e baad / Chess of the Wind (Mohammad Reza Aslani, 1976) 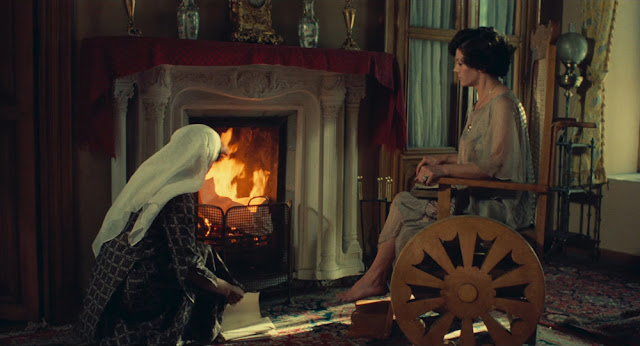 Banned in 1979 by Iran’s new regime, and more than three decades later rediscovered and restored, Chess of the Wind is a film of incredible cinematic power, one that has been compared to masters such as Ophüls, Visconti and Parajanov. Its multi-layered, decidedly anti-patriarchal tale of greed and oppression, as well as of gender and class struggle opens as a moody melodrama, transforms into a Shakespearean tragedy, then gradually approaches the psychological thriller domain where it remains during the climactic twenty minutes. All the while, it is handled with extraordinary formal discipline and intelligence that find support in a most elegant art direction, picturesque cinematography and hauntingly tense score synthesizing experimental jazz and traditional Persian music. A gorgeously furnished mansion which serves as the (claustrophobic) setting becomes a character in its own right, pulling the viewer into a dense microcosm of intrigue. On top of that, Chess of the Wind introduces a couple of strong female leads – brilliantly portrayed by Fakhri Khorvash and Shohreh Aghdashloo – whose relationship is subtly infused with lesbian subtext.
3. Śniegu już nigdy nie będzie / Never Gonna Snow Again (Malgorzata Szumowska & Michal Englert, 2020)

Szumowska & Englert invoke the spirit of Tarkovsky through direct references to the master’s work in nostalgia-imbued dreams and visions of their hero – a young, enigmatic immigrant from the East, Zhenia (Alec Utgoff in a career-defining role) who speaks several languages and works as a masseur-turned-hypnotist guru of a wealthy gated community somewhere in Poland. However, even the peculiarly cinematic and often darkly humorous ‘reality’ of the duo’s surrealist drama shimmers with numerous moments of stark visual poetry, providing you with a hauntingly enchanting experience. Gently wrapped in moss-colored velvet, their satirical blade cuts deeply into the wounds of modern society, as if reaching for some long-buried truth, with Zhenia embodying that very truth – the secrets we may never know. There’s an almost saintly aura surrounding him and – complemented by his broad shoulders – making him the object of both spiritual and carnal lust for the poor wretches he regularly visits, armed with a portable massage table, and healing powers. So, if you’re looking for a delicately mysterious, charmingly doomy and/or ecologically conscious film, Never Gonna Snow Again is the one you shouldn’t miss.
4. Miao Xian Sheng / Mr. Miao (Lingxiao Li, 2020) 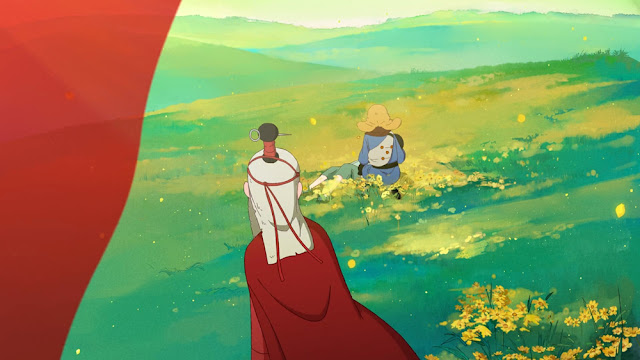 A promising debut for Lingxiao Li, Mr. Miao is a lush, somewhat esoteric fantasy adventure which betrays the influences of wuxia films, Hayao Miyazaki, and to a certain degree, anime series Mushishi. It follows a couple of mysterious ‘tracers’, elder Liang Yan and his disciple Ding Guo, on their quest to eradicate so-called Equinox Flowers which possess corruptive powers, albeit being hosted exclusively by kindhearted souls. Faced with the dilemma of killing a few good men and women to save the world from debauchery, they travel the land struck by poverty and ravaged by crime, with the orders of titular (and unseen) entity as their only guide...

Episodic in its narrative structure, Mr. Miao is reminiscent of a road movie set in the mythologized version of ancient China where fire cicada sloughs have higher value than money... and thy neighbor. The fever dream-like journey towards the answers hidden in Thousand Buddha Cave feels simultaneously perplexing and fairly intoxicating, all by virtue of lovely hand-drawn designs, painterly backgrounds, and mellifluously melancholic score, all wonderfully complementing each other. The surreal, or rather mystical beauty of the world infused with magic and slight humor (code: ducks) reaches its full bloom in the cathartic finale which depicts the decisive battle in a transcendental whirlwind of light and colors. 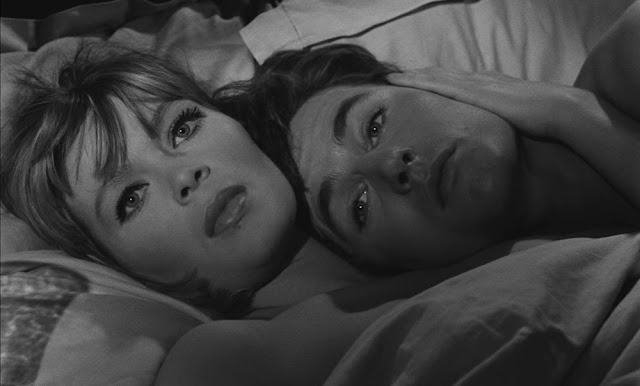 Oh là là! Strip-tease gets transformed into fine art with a hint of camp in Jacques Poitrenaud’s entertaining drama starring Nico as a starving ballerina, Ariane, who breaks through the world of exotic dancing, and catches the eye of a rich and handsome playboy, Jean Loup (Jean Sobieski). The sadness in her big, round eyes, gorgeous B&W cinematography and energetic soundtrack by Serge Gainsbourg and Alain Goraguer (who would work on the cult animated film Fantastic Planet 10 years later, then compose scores for adult films in the late 70’s) make for an absolutely charming combination.
6. Віддана / Felix Austria (Christina Sivolap, 2020)

“People see only what they want to see. People yearn for illusions.”

Directed with a great sense of style that brings to mind Jeunet and Gondry, Christina Sivolap’s feature debut is a charming period piece heavily inspired by magic realism in its approach to storytelling, as well as by Art Nouveau in its enchanting visual flourishes (many kudos to costume designer Lesia Patoka and art director Aleksandr Batenev). Set in a small Austro-Hungarian town at the turn of the 19th century, this fantasy drama chronicles the tale of a maid with the heart of gold, Stefania, who spices up the life of her half-sister mistress, Adela, and her husband, Petro, with delicacies that are so meticulously shot that you can almost smell their aroma! And what adds extra flavor to the viewing pleasure is the sparkling chemistry between the leading actresses Marianna Januszewicz and Alesya Romanova, whose characters appear to be founded on Grimm-like opposites. 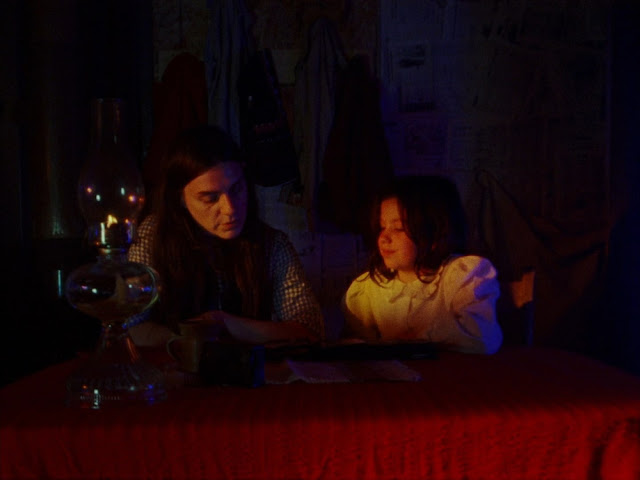 Existing in a liminal space between fiction and documentary / deeply personal film and archetypal pseudo-myth / family drama and haunting mystery, and resisting every attempt to be clearly defined, ‘Ste. Anne’ feels like a cinematic equivalent of a half-forgotten childhood memory turned into snow that covers the abstract landscape of the filmmaker’s very soul. Warmly shot on 16mm, it eschews both narrative and structural conventions in favor of a poetic, evocative, mysterious and contemplative atmosphere which shrouds you in a hand-woven tapestry of non-sentimental familiarity...
8. De Uskyldige / The Innocents (Eskil Vogt, 2021)

Told and shot from the children’s perspective, The Innocents – not to be confused with Jack Clayton’s 1961 masterpiece – is a deliberately paced, densely atmospheric and emotionally harrowing drama with supernatural / horror elements thanks to which it fills you and leaves you with the feeling of uneasiness bordering pedophobia. Vogt elicits brilliant, eerily natural performances from young debuting actors, whereby Sturla Brandth Grøvlen’s delicate cinematography coupled with a brooding score by Pessi Levanto makes their world in equal measures alluring and unwelcoming...
9. Wolf (Natalie Biancheri, 2021) 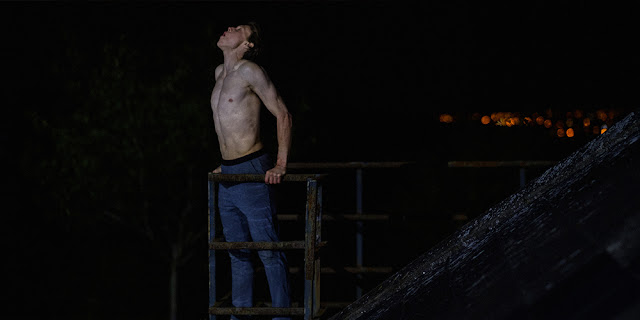 The Chinese mythology surrounding prince Nezha gets a steampunk upgrade in the sophomore feature from Ji Zhao who debuted alongside Amp Wong in a gorgeous 2019 wuxia fantasy White Snake. A simple, yet undying story of good vs. evil seems to be there only for the animators to demonstrate their enviable talents, because it is the colorful, aesthetically stunning visuals that carry you through the film. The beautifully lit industrial setting which takes cues from 1920’s Shanghai and 1940’s Hollywood crime movies poses for a retro-futuristic dystopia in which the water shortage is caused by ancient deities reincarnated as arrogant magnates. What they (and some protagonists) lack in the character development department is compensated by fascinating designs, not to mention breathtaking action sequences that involve everything from exciting moto-races to spectacular taming of raging dragons. Judging by one of the post-credit scenes, the amazing universe of Nezha Reborn will be expanded next year...
Објавио Nikola Gocić у 11:45 AM