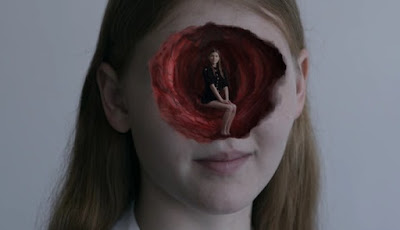 For starters, let me be honest - I am not an admirer of Athina Rachel Tsangari's feature films. Quite the contrary, I find Chevalier unbearably flat, excruciatingly tedious and not even a teensy bit funny, whereas Attenberg left me struggling between 'wow, that's weirdly fascinating' and 'now, that's just plain frustrating'.
The Capsule, on the other hand, is a pure delight. In under 40 minutes of its running time, it packs more punch than the above-mentioned dramas put together. Part haute couture fever dream, part allegorical performance and part absurd, neo-gothic fantasy, it drops some edgy commentary on women's essence, sexuality and role in society through the ages, bringing to life several bizarre paintings by the Polish artist and Tsungari's co-writer Aleksandra Waliszewska. 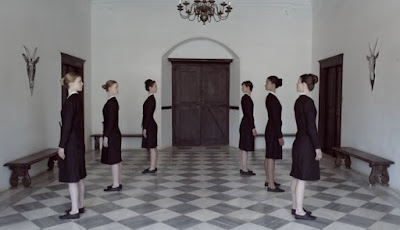 Set in 'a mansion perched on a Cycladic rock', the cyclical story revolves around the daily rituals of six ethereal young ladies (Clémence Poésy of In Bruges fame and Isolda Dychauk from Sokurov's Faust, among the others) supervised by the Mother Superior-like figure (the ominously seductive Ariane Labed from Attenberg). The utterly odd proceedings involve The Exorcist-style head spinning followed by heavy grimacing, late dinners involving raw quail eggs, walking the baby goats and free dancing to the low-key cover of America's A Horse With No Name while wearing a skimpy, movement-restricting 'attire'. Think Hadžihalilović's Innocence playing out in a witches' convent invaded by nightmarish, Bosch-esque visions and you might get the idea of what to expect.

Boldly experimenting, eschewing dialogue for the astonishing imagery (kudos to DoP Thimios Bakatakis who also collaborated with Yorgos Lanthimos on Dogtooth and The Lobster) and mystifying soundscapes, Tsangari imbues her work with both twisted, self-conscious humor and surreal, hypnotic atmosphere. Her enigmatic characters - 'born' in the strangest interior places - appear as simultaneously fragile, innocent and capable of realizing their darkest desires confessed in one of the most whimsical scenes. Their costumes carry a symbolic meaning and the same goes for their 'home' and its stone-cold surroundings in which they remain mentally, physically and spiritually entrapped. 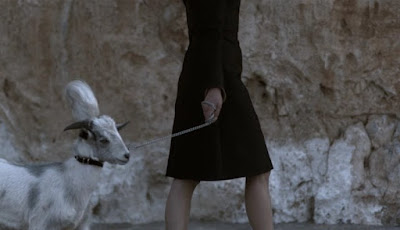