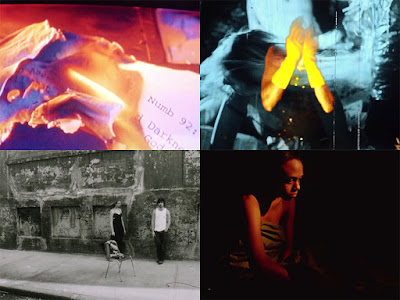 When describing the works of the mixed media artist M. (as in Michael) Woods, you can come up with at least one word for each letter of the alphabet (after some thought and googling, of course).

As far as his longest short film DisneyWorld is concerned, the most (if not all) of the listed labels apply. A part of The Numb Spiral project which unifies Woods's oeuvre into 'the point at which consciousness negates being, and a cruel illusion maintains control of the flailing senses' (as the author puts it), this staggering phantasmagoria appears as a chaotic, feverish nightmare dreamed by a locked girl from Lynch's Darkened Room. (A Day in a Place also features some similarities to the said experiment.) 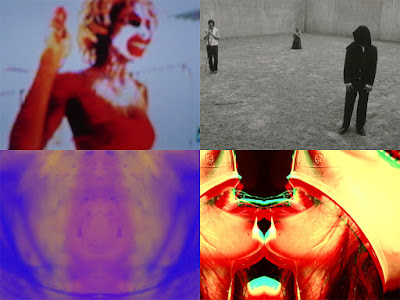 It can be viewed as a sardonic satire on mass media, a cautionary 'tale' of drug abuse,  a subversion of the American dream or an edgy critique of racism, consumerism, gender roles, sexual exploitation and/or pop-culture machinery. Whatever the case may be, it is a relentless assault on senses; a hysterical cavalcade of intoxicating (and frequently hand-processed) imagery captured on 8mm and 16mm tapes and accompanied by the colorful, consuming cacophony of sounds.

Imbued with rich, gloriously diverse textures, the psychedelic or rather dissociative visuals establish the atmosphere of sustained paranoia and looming nothingness. Flashing and flickering almost incessantly, they plunge you into a mad world of TV addicts, abusive lovers, forceful uncertainty and circuit board Communions where Mickey Mouse lies disemboweled in a worm-infested pit.

Woods assumes the role of a daring street artist and supported by the uninhibited performances from a non-professional cast, he paints the living mural of our baffling and fearsome present...

DisneyWorld is available on the director's official vimeo channel.