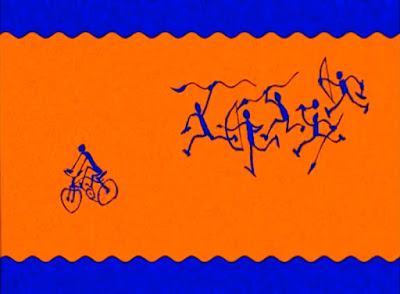 So simple and yet so effective. The Slovenian writer, filmmaker, visual and performing artist Janja Rakuš erases the (thick) line between the parietal and contemporary art, spinning a multilayer fantasy by using a single image. A blue-orange scene which depicts a bicycle rider pedaling away from a group of angry prehistoric hunters is animated via effects mimicking waves of different amplitudes and accompanied by the atmospheric, somewhat uncanny sounds of bubbling water and distant wind howling (John Watermann).

Is it just a stylistic exercise, a witty homage to the earliest bursts of creativity or a comment on narrow-mindedness preventing progress? It could also be viewed as an attempt to envision an alien force examining some forgotten earthly artifact or as a joke played on the viewer over-analyzing it. (Hell, maybe the rider is a bad guy!) Whatever the case may be, Lust Bath is an inspired piece of experimental cinema.

Whether he's visualizing a song for the mad French genius Igorrr (Opus Brain) or making an essay documentary on the Swiss artists couple Silvia Gertsch and Xerxes Ach (Everything That We Saw, originally Alles was wir sahen, highly recommended!), Garrick J Lauterbach makes sure to put you in a contemplative mood.

In an aural, trip-hop sci-fi mystery Solar Soliloquy, he collaborates with Audio Dope (Mischa Nüesch), taking high art approach to directing a music video. His lyrical story opens with a nebula of colors suddenly turning grayish white as the sky above the metropolis of glass, steel and concrete constructions. The imagery of imposing rocky hills intrudes and we witness the birth or rather, the arrival of a blonde young man who is presumably an alien being (angel?) in human guise or a dead soul resurrected for a few fleeting moments back amongst the living.
What follows is the unidentified protagonist's experience on Earth, involving a box match (we only see the aftermath of) and a wild night at a dance club which ends in re-merging with the Universe, all beautifully captured with the keen eye of DoP Tobias Kubli. Lending his unusual physiognomy and giving the expressive performance is Benjamin Jäger in the starring role.