If you ever wanted to see a piece of ancient Greek pottery brought to life, Orpheus and Eurydice is your dream (short) film. Written, directed and brilliantly visualized by the Scottish animator Lesley Keen, this rendition of the famous myth is as close to perfection as one can get in six minutes. 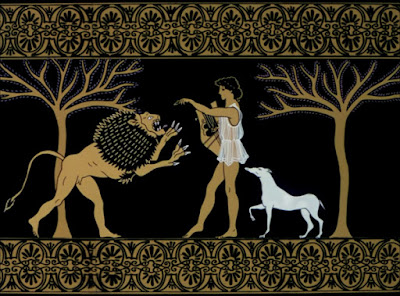 What superficially seems to be the ultimate love story, as the official synopsis notes, can be interpreted as the battle of Art vs. Death, or rather the portrayal of an artists' efforts to overcome life's finality. Its universal appeal and timelessness come not only from its archetypal ingredients, but also from the simple, yet beautiful fantastic imagery that respectfully mimics and slightly upgrades the scenes from the vases of the 'red-figure' period. Actually, the 'living' characters and various other details are tinted in yellowish-orange on the black background, as their 'ancestors' appear these days. 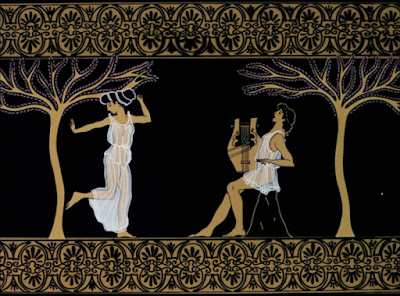 Orpheus's ordeal is depicted without a single dialogue in a 'long-take sequence' that predates the belt-scrolling method used in classic beat 'em up games from the 90s. The descent into the underworld 'unfurls' from right to left until the hero finally reaches Hades and Persephone, whereby the subtle change in floral frame decor signifies the switching of realms. Big kudos to both Keen and her cameraman Donald Holwill for the hyper-stylish 'no cuts' effect. 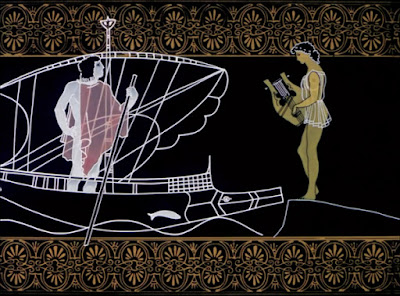 And since the creative team behind this little masterpiece is comprised of only five members, everybody else also deserves to be mentioned. The exquisite drawings are complemented by Alan Mason's ink and paint work, as well as by Lyell Creswell's haunting, unearthly electronic score which features ethereal soprano vocalizations by Heather Coates.

Orpheus and Eurydice is available on VOD (Vimeo on Demand) for $1.00.
Објавио Nikola Gocić у 9:20 PM