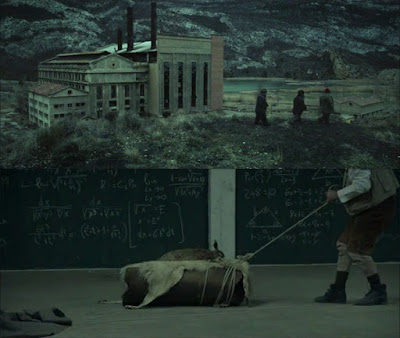 Following Caballero's zany debut Finisterrae, starring two guys wearing sheets in the roles of ghost-pilgrims, is another marvelous example of the Catalan's "prankster art cinema". A deliciously preposterous story chronicles elaborate preparations for a heist, whose purpose is a titular McGuffin. "The amount of space between two places and things", as the Merriam-Webster dictionary defines distance, is much more than an abstract noun for both the author and the eccentric characters of this well-intentioned, over-the-top farce.

Gifted with stupefying ESP powers, such as telepathy, telekinesis and telecommunication with a sexy croupier in Las Vegas, three Russian dwarves orginize and eventually carry out the robbery for a kidnapped Austrian performance artist, sporting a dried-mud-covered face and a pair of Lederhosen. Their only obstacle is presented in the form of a guard who has a high-heel fetish and the strangest of the strange pets - a smoking, haiku-reciting bucket infatuated with a chimney. 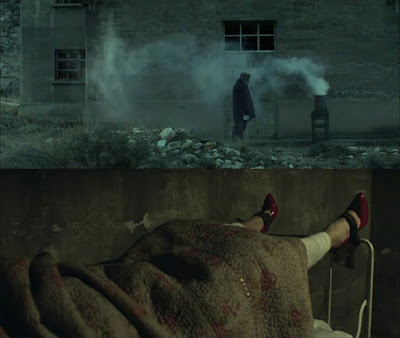 From the introductory narration, through the absurd shenanigans of the "ruin porn" kind and all the way to the 'Borgesean' epilogue, Caballero demonstrates a keen sense of deadpan humor, as well as a fondness for powerful 'Tarkovskian' imagery. Occasionally, his surreal puzzle strikes 'Buñuelean' & 'Lynchean' chords, whereby it features a few dimensional rifts, dead rabbits, edible Yoko Ono, a functional junk-parts-machinery and a spectacular frozen-wasteland scenery. The atmosphere of drab, Soviet-like dreariness is complemented by a multilayered soundscape of Lenin's speeches and the tracks that might have been taken from some scream queens' agony compilation. Stylishly shot by Marc Gómez del Moral, the world of The Distance (La distancia) is deeply rooted in the irrational, meaning that it will either draw you in or you'll feel utterly repelled by its ridiculous, yet peculiar charms. Whether it has a deeper meaning or not, it's quite original, so encore, please!

(If this loony flick sounds like your cup of tea, be sure to check out my first list at Taste of Cinema.) 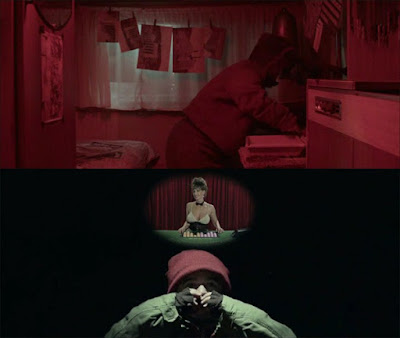