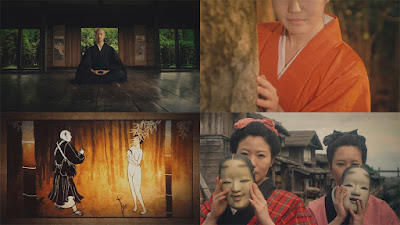 Suffering of Ninko marks a unique feature-length debut for Norihiro Niwatsukino who plunges the viewers into the world of Edo-era Japan they've likely never seen before, making them the witnesses of a weird, surreal clash between celibacy (read: repressed sexuality) and libidinous desires (posing as a dark side of sorts).

Opening with 'long time ago', the film introduces us to Ninko (Masato Tsujioka) - a devout and diligent Buddhist neophyte of Enmei-ji temple. When he's not brooming the staircase or visualizing religious imagery out of round-cut root vegetables, he practices meditation, like every good monk would do.

However, he has a huge problem, because there's this aura about him that transforms all the ladies into nymphomaniac groupies (during the alms begging) and lures a couple of his brethren out of the closet. After a particularly worrisome encounter with a mysterious woman behind a Noh mask, he decides to go on a journey of purification which will get him more than (or exactly what?) he bargained for...

And so, a fairy tale takes a comedic turn, borrows a road-movie trope or two, flirts with folklore-inspired horror and ends on an ecstatic note, all the while defying genre classification and seething with cult status potential. Niwatsukino is not afraid to risk and the best proof of his gutsy direction is a splendid sequence of Ninko's lucid hallucination or rather, achievement of lustful Nirvana, accompanied by the exquisite J-traditional remix of Ravel's Boléro.

In a matter of minutes, he ably blends softcore erotica with a sensual dance performance, bringing ancient manuscripts to life through the short animated vignettes, both naughty and beautiful. These 'anime' bits serve as a 'glue' for live-action scenes, plugs for the holes in the shoestring budget, as well as a concise insight into the history of J-art, from Buddhist mandalas to ukyo-e, involving a good deal of shunga. Not to mention they reflect the unrestrained creativity of their author who is credited as producer, director, writer, editor, animator and VFX supervisor, so one has to respect his ambition, at least.

With two DPs by his side, Niwatsukino delivers plenty of aesthetically pleasing shots, notwithstanding the limitations of a digital camera. His tongue-in-cheek attitude never stands in the way of the decisions he makes, rendering Suffering of Ninko simultaneously Zen and profane, a guilty pleasure and a great example of experimental cinema. 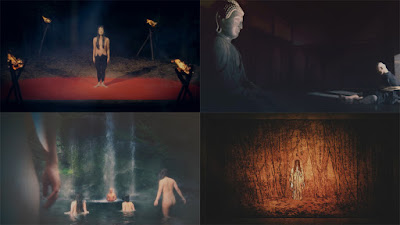