Drawing inspiration from the dadaist (love) poem An Anna Blumme (aka Eve Blossom) by Kurt Schwitters, the Super 8 Alchemist duo Sarahjane Swan and Roger Simian conjure another experimental marvel - a lyrical / non-narrative mind-tripper of a film defying any categorization.

Their distorted visuals which transform the viewer into a mesmerized synesthete, as well as into a perplexed somnambulist, are achieved via 'long-expired Kodachrome 40 filmstock processed in Caffenol (coffee + vitamin c + washing soda) and handcrafted with scratches, nail varnish and permanent markers', as noted in the official synopsis.

The refreshing stream of abstract, occasionally 'palindrome-ized' and emotionally charged imagery is complemented by the dissonant score marrying Gustav Holst's soothing piece Venus, the Bringer of Peace to pounding post-industrial beats by The Bird And The Monkey. A weird, yet bloody effective combo!

It sees Anna Blumme (re)imagined as the 'killer cheekbones' lady called Merzfrau (Ms Swan and her highly expressive face), with Loie Fuller (of the Lumière Brothers' Danse serpentine, 1896) 'casted' as Terpsichore - the muse of dance and chorus. Topping their booming and spuming bloom in the midst of harmonic chaos is Bloomed - Simian's delightfully awkward and brightly dusked homage to the abovementioned poem.


(Merzfrau is not yet available publicly.) 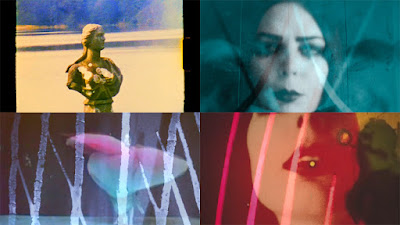 
The latest offering by the self-taught, multi-award-winning artist Murat Sayginer continues where the previous ones left off - at the peaceful intersection of deified reveries, remodeled myths, esoteric musings and spiritual meanderings. Contemplative and as purple as the title suggests, Sayginer's dreams appear as eidolic figures who might be emerging from the elusive imagination of Kubrick's Star Child. 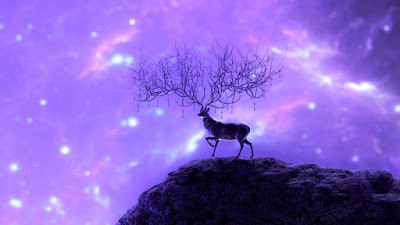 Despite being rendered in 'plastic' CGI, with all of the 'characters' or rather symbols frozen in time and space, they are imbued with arcane primordial powers which make them wondrously imposing. Whether we are shown Poseidon brooding above the restless waves, an astronaut deeply lost in his own thoughts or a deer whose majestic, tree-like antlers are adorned with keys (to universal truths?), there is something absolute lying behind their stillness. 'Moving' them towards the sublime crescendo is Onur Tarçın's energetic and evocative score.