2 x Mini-Review (The Handmaiden / The Childhood of a Leader)

Based upon the novel Fingersmith by Welsh writer Sarah Waters, the latest opus from Oldboy's helmer is an epitome of style and elegance. Replacing the original work's Victorian era setting, it's also an authentic throwback to Korea under Japanese rule in the '30s of the last century.

Evoking Kechiche's Blue Is the Warmest Color during the lascivious but tastefully rendered sex scenes, Park's return to home grounds is posh and lavish all the way, from Chung-hoon Chung's alluring cinematography to Seong-hie Ryu's impeccable set design. An absolute must-see.

The cooperation with auteurs such as Michael Haneke (Funny Games) and Lars von Trier (Melancholia) must have had a profound impact on 28 yo thesp Brady Corbet, whose ambitious directorial debut shows a lot of promise. Co-written with his partner, Norwegian-born actress Mona Fastvold, and loosely inspired by Sartre's short story of the same name, The Childhood of a Leader is an impressively crafted period drama about the roots of a ficticious fascist figure.

Starring outstanding British newcomer Tom Sweet as the brattish anti-hero, and Bérénice Bejo and Liam Cunningham as icy-cold, austere and distant parents, the film is set during the Great War closing, while most of the events occur in the ramshackle villa in rural France. Bleak atmosphere, portending the upcoming dread of WWII, is felt in every single frame of gloomy browns and grays and hightened by unnerving silence or Scott Walker's sinister, boisterous and cacophonous score. Enwrapped in the veil of mystery and moving at a languorous pace, the narrative is pushed behind the darkly beautiful imagery and foreboding soundscapes. Corbet refuses to reveal the true reasons for the boy's obnoxious behaviour and his frightening rise to power, even suggesting that supernatural forces might be at work. Casting Robert Pattinson in small, but important dual role, as jurnalist Charles and grown-up Leader, he ironically addresses the celebrity cult hysteria and its potential to grow into something dangerous.

Spliting The Childhood... into three acts, wittily titled "tantrums" as an offset to feature's overwhelming seriousness, he claims that it is "not that one man has the courage to be evil, but that so many have not the courage to be good." 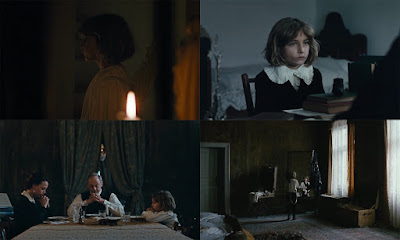