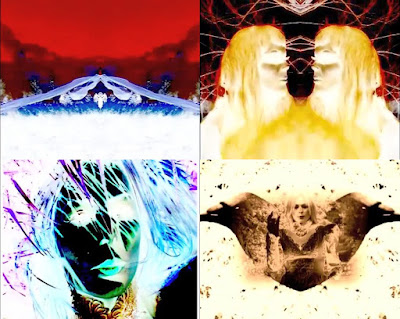 The Scottish artist duo Sarahjane Swan and Roger Simian, aka The Bird And The Monkey, have collaborated since 2009 on a number of projects, involving alternative music (and accompanying videos), installation art and experimental films in both digital and analogue (Super 8) format. Their visual works - created under the label of AvantKinema - combine re- and deconstructed myths with personal obsessions into something delightfully quaint, yet decidedly modern (or rather, timeless), and not to mention idiosyncratic.

For their 'forgotten' debut which is their longest and (if you ask this writer) best short film, they merge the footage shot at the Ring of Brodgar and recontextualized parts from Ghost - Apparition into a hypnotizing, mind-boggling phantasmagoria which looks like a spiritual predecessor to Pais and Fawcett's In Search of the Exile. Orphic and sublimely beautiful, Alchemikal Sundays takes you to the outermost fringes of the subconscious mind and makes you think abstractly and try contemplating on intangible concepts. What appears to be a lyrical narrative about the birth of a Goddess and her (odd) initiation to the Unknown World is told via the unearthly canvases of vibrant, trancelike colors complemented by gothic-like, darkly ethereal music which sets the atmosphere of pure wonder.

Its first ten minutes prove the eye-pleasing quality of symmetry - they are composed of mirrored images which reflect Ms Swan's elegance in front of the camera, turning her into elusive, indescribable, constantly metamorphosing forms. Captured in variously distorted dream states and propelled by the primordial forces of some mysterious Universe, her character is as contradictory as that of the Summerian deity Inanna who also inspired the duo's Orphine. And she remains equally powerful when the film switches to asymmetrical mode, her dress fluttering in the winds of the Beyond...