The Sky Trembles and the Earth Is Afraid and the Two Eyes Are Not Brothers (Ben Rivers, 2015)

A contender for the title of the year (and a blessing for the reviewer in need of a few more words), The Sky Trembles and the Earth Is Afraid and the Two Eyes Are Not Brothers is unconventional, to say the least. Its intriguing, sort of meta-narrative is divided in two clearly distinct parts - initially, it keeps track of a troubled film production in Morocco, whereas during the second half, it turns into the adaptation of Paul Bowles's short story A Distant Episode.

The "making of" in question is Mimosas whose director suffers the same fate as the linguistics professor from the aforementioned literary work. After wandering off the set - irritated by the ever-growing obstacles - he is attacked by Reguibat bandits who beat him up, cut out his tongue and force him to dance in a costume covered with tin can lids. Reduced to a mute desert jester and mockingly addressed as a king, he is not only depersonilized, but dehumanized as well.

One might recognize the irony in this poor man's misfortune - after all, his collaboration with the locals - albeit not of a slave-driving kind - is for the sake of entertainment. We can go as far as to say it is a belated act of revenge against colonialism, but even so, Rivers's fellow colleague seems to be a victim to sympathize with. Another way of looking at the film is through the prism of Westerners' fear or misappreciation of an exotic, introvert culture and vice-versa. The coping with a language barrier, the pains of artistic creation and the quest for freedom along the thorny road are some of the themes this meditative, deliberately paced docu-fiction is also infused with.

As you might already guessed, The Sky... is not easily digestible, yet the visuals are frequently so hypnotizing that you lose a sense of time. Shooting on 16mm, Ben Rivers captures the austere beauty of a hostile craggy environment, ramshackle stone villages and bright yellow sunsets of both opening and closing scenes. And his protagonist's attire adds an esoteric touch to the raw poetry of images. 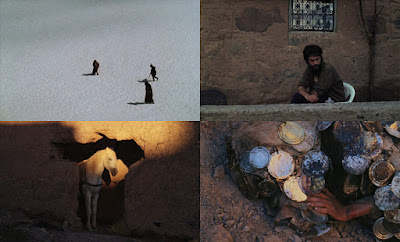